Seventeen cases of fungal endophthalmitis occurred after intravitreal injection of triamcinolone sourced from a single lot prepared by a compounding pharmacy in California. All were infected with Bipolaris hawaiiensis, a common plant pathogen and an uncommon human pathogen.

In a retrospective analysis- fungal endophthalmitis developed in 82% (14/17) of eyes after intravitreal triamcinolone obtained from the same lot. Median onset was 83 days (range, 6-322 days). Pre-injection visual acuity ranged from 20/20 to counting fingers (median, 20/50). Median visual acuity at last follow-up was 20/400 (range, 20/30-no light perception). The most common signs and symptoms were decreased vision (57% [8/14]), vitreous cell (64% [9/14]), and anterior chamber cell (50% [7/14]). Fungus was detected either by cytologic or culture examination in 7% (1/14) from initial vitreous tap. By comparison, vitreous samples obtained by pars plana vitrectomy (PPV) resulted in fungus-positive cytologic results in 43% (6/14) of eyes and positive culture results in 36% (5/14) of eyes. All culture-positive specimens (100% [5/5]) identified B. hawaiiensis as the infecting species. Overall, fungal infection was confirmed in 57% (8/14) of eyes by either cytologic or microbiologic analysis. 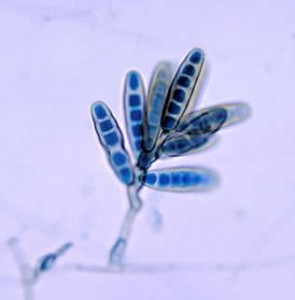 Notably the clinical presentation of this infection was delayed up to 10 months.  A vitreous tap may be inadequate to detect it due to its insensitivity and direct vitreous biopsy by PPV may be the preferred choice to identify the presence of fungal endophthalmitis and facilitate  a prompt diagnosis and treatment.

Most, if not all, retinal practices use products from compounding pharmacies or from hospital pharmacies that compound or repackage intravitreal medications thus enhancing the risk of contamination.

Bipolaris hawaiiensis causes phaeohyphomycosis (because it has much melanin in its cell wall) and has been associated with infection in normal and immunocompromised patients. The most frequent infections recorded have been fungal keratitis, subcutaneous phaeohyphomycosis, rhinosinusitis, peritonitis in patients CAPD, and both cerebral and disseminated infections.

(Note: Recent revision of the taxonomy of Bipolaris and many species are now included in the Curvularia genus).
Links:  Article,  Fungal endophthalmitis,