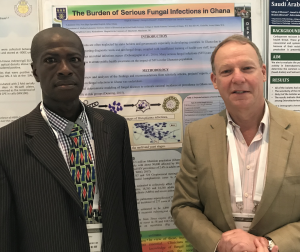 For 213 million people, the number affected by serious fungal diseases infections in Ghana, South Africa, Ethiopia and Taiwan has been unknown, until today. At the Gulf Conference on Clinical Microbiology and Infectious Diseases in Dubai posters showed the remarkably high numbers afflicted, especially in Africa, an estimated 4%, 7% 9% and 2% respectively. The data from Taiwan compared the National Health Insurance database and estimates based on patients at risk, as for other countries.

In Africa, tinea capitis dominates the overall fungal burden with an estimated 8.6 million affected in only these 3 countries, and very few in Taiwan. Globally, it is thought that about 200 million children have tinea capitis.

Only in Ghana could an estimate of fungal keratitis annual incidence be made: 810 cases, likely an underestimate. In Taiwan, 8.2% of microbial keratitis cases are caused by fungi, but there is no overall number.

These four country estimates bring to 79 the number of countries with a country burden estimate, 57 of which are published (Iran in press).  Abstracts are all posted on LIFE news: http://www.life-worldwide.org/media-centre/news and published papers on the Aspergillus Website and on GAFFI: https://www.gaffi.org/media/academic-papers/

LIFE is fully supported by the Fungal Infection Trust.