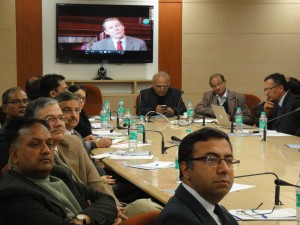 Participants at the Delhi launch of GAFFI

Fungal infections kill at least 1,350,000 patients with or following AIDS, cancer, TB and asthma as well as causing untold misery and blindness to tens of millions more worldwide. Yet its symptoms are mostly hidden and occur as a consequence of other health problems, and the tragedy is that many of the best drugs have been available for almost 50 years.

Blindness caused by fungal infection of the eye affects over 1 million adults and children globally with a particularly large number in India and SE Asia. Asthma is complicated by fungal allergy and is a key factor in severe asthma. In India there are 17-30 million adults with asthma. Asthma complicated by allergic aspergillosis is estimated to affect 860,000 to 1,520,000 in India (the highest rate in the world) and there are a similar number of patients with severe asthma with fungal sensitization. Worldwide there are 350,000 deaths from asthma each year, many in India. Yet fungal asthma is treatable with antifungal drugs with 60-80% improvement rates. After TB about 20 per cent of patients develop lung fungal infection, which slowly progresses to death over several years, unless arrested with treatment, an estimated burden of 1.2 million people worldwide and 290,000 patients in India. Fungal meningitis and pneumonia kills in excess of 1 million patients with AIDS every year, including many children, before treatment for HIV can begin to work. Candida bloodstream infections are hospital acquired and India has one of the world’s highest rates with poor survival. Over 170,000 cases of mucormycosis are estimated to occur in India each year, the highest rate in the world. Skin fungal infections affect a billion people worldwide.

The summary action plan developed at the meeting was to undertake:

4. Development of more reference laboratories across the country in India

Professor Chakrabarti explains: “Fungal diseases are a global plague with a disproportionately high burden in India. Even with the World Health Organisation developing clinical guidelines for doctors for fungal meningitis in AIDS, almost all other critical fungal infections are ignored. The lack of appropriate fungal diagnostic capability in most Indian states is a remediable tragedy resulting in millions of avoidable deaths and illness.” View radio interview

GAFFI President David Denning declared: “GAFFI’s mission is to improve this dismal situation in India and elsewhere. Whilst India has a high level of expertise in many hospitals, simple, non-culture based tests are not available in most of India, and so antifungal therapy is denied to the majority of the population.”

But experts believe the tide could be turning: The launch of GAFFI comes hard on the heels of a statement from the World Medical Association’s annual meeting in November 2013 urging national governments to ensure that diagnostic tests and fungal therapies are available for their populations.

GAFFI has a stellar international Board and Advisor group from the UK, USA, Brazil, India, Australia, Spain, Switzerland, Norway and Japan to guide the foundation’s work as it begins its many tasks to rescue patients.