Alongside the 80th anniversary of the Cuban Tropical Medicine Institute, 200 scientists and doctors sought common actions to reduce the stigmatizing burden of chromoblastomycosis. This persistent and progressive fungal infection is usually caused by a trivial injury, usually on the leg or arm, and has recently been recognised by the World Health Organisation (WHO) as a Neglected Tropical Disease (NTD). Often it is untreated for months or years, and patients develop cauliflower like growths which are difficult to eradicate. 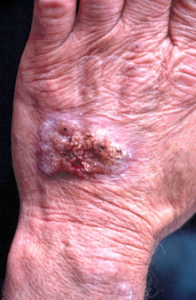 Chaired by Dr. María T. Illnait-Zaragozi from  Cuba and Professor Flavio Queiroz-Telles from Brazil, an international group of speakers over-viewed all aspects of this disease. Chromoblastomycosis is widely distributed, and can occurs in temperate zones on occasion. Many countries have yet to report cases, especially in Africa, which is indicative of a lack of diagnostic capacity.
The fungi that cause it, have a highly characteristic appearance in tissue, if examined, but are slow to grow in culture and can be difficult to identify. New and rapid molecular tests are being pioneered in Madagascar where the disease appears to be especially common.
Treatment is partially effective, but is long term and unaffordable for most patients.

A final session addressed the public health issues with contributions the Global Action Fund for Fungal Infections (GAFFI). Capturing epidemiology data, and in some countries linked with mycetoma and sporotrichosis, it was extensively discussed and plans agreed for China, Mexico, Cuba and Ecuador.
A definition of chromoblastomycosis for public health efforts was agreed: ‘Chromoblastomycosis is a chronic (>3 months) cutaneous and subcutaneous fungal infection manifesting with verrucous, nodular and plaque lesions, depicting muriform fungal cells on microscopy.’ 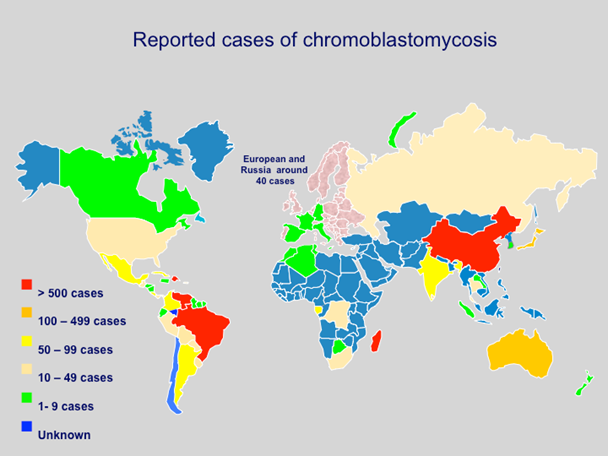 World distribution of cases of chromoblastomycosis

Professor Flavio Queiroz-Telles, one of GAFFI’s ambassadors for Brazil, declared: “The inclusion of chromoblastomycosis with mycetoma on the WHO’s NTD list will directly support efforts to control this horrible and disfiguring disease. It dominates the lives of my patients, to the extent that some are ostracized form their communities. Better diagnosis and therapy and especially earlier recognition will have a substantial impact.”

Professor David Denning, University of Manchester and President of GAFFI emphasized: “The community of physicians and researchers in chromoblastomycosis demonstrated their commitment to addressing the public health issues of the disease. In particular, they are keen to work with the WHO and its Regional Offices on establishing the burden of disease and developing prevention and diagnosis.”

Dr. María T. Illnait-Zaragozi from the Instituto de Medicina Tropical “Pedro Kouri” said: “It was a unique opportunity to enhance our experience and I would also like to thank the International Society for Human and Animal Mycology (ISHAM) for supporting the meeting.”