A worldwide increase in the frequency of fungal diseases has been reported in the last 3 or 4 decades. Knowing each country’s burden and epidemiologic trends of fungal diseases is necessary to prioritise prevention, diagnostics and therapeutic strategies. Country estimates for the burden serious fungal diseases have been published by Leading International Fungal Education (LIFE) collaborators in 43 countries, and another 28 abstracts. But how accurate are these estimates?

Dr Felix Bongomin and colleagues at The University of Manchester, UK have provided a summary and critique of published estimates from 43 countries. 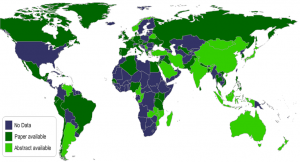 Invasive aspergillosis estimates are dominated by the number of COPD patients admitted to hospital. Invasive aspergillosis annual incidence in 40 countries was estimated at 81,927 cases in 2,000 million people (29% of the world population) with the maximum number of cases in Vietnam (14,523 cases a year). The lack of data on COPD admission to hospital was a limiting factor and the lower estimate from Spain of 1.3% was used in preference to the higher rate of 3.9% found in southern China. One large study of invasive aspergillosis in lung cancer found a rate of 2.6%, a global total of 47,400 is likely assuming other countries have the same rate as China, and this was only included for a few countries.

A similar critique of the likely estimation error was applied to Pneumocystis pneumonia (40 papers), chronic pulmonary aspergillosis (43 countries), fungal asthma (ABPA and SAFS) (43 countries), fungal keratitis (13 countries) and tinea capitis in children (16 countries). The authors call for improved and up to date epidemiological data to improve the data quality, as, for most countries, such studies have not been done.