At the Russian-Chinese conference on Medical Microbiology and Clinical Mycology in St Petersburg, GAFFI’s President, Professor David Denning outlined the massive opportunity to save many lives from AIDS.

In 2014, UNAIDS estimated that there were 1.2 million deaths from AIDS, ~400,000 attributable to TB. Four fungal infections probably account for over 500,000 deaths a year in AIDS around the world – Pneumocystis pneumonia, cryptococcal meningitis, disseminated histoplasmosis and subacute invasive/chronic pulmonary aspergillosis. Highlighting the problem of ‘smear negative TB’, which in fact has a different cause, notably histoplasmosis or aspergillosis, Denning illustrated the similar radiological features of these conditions. 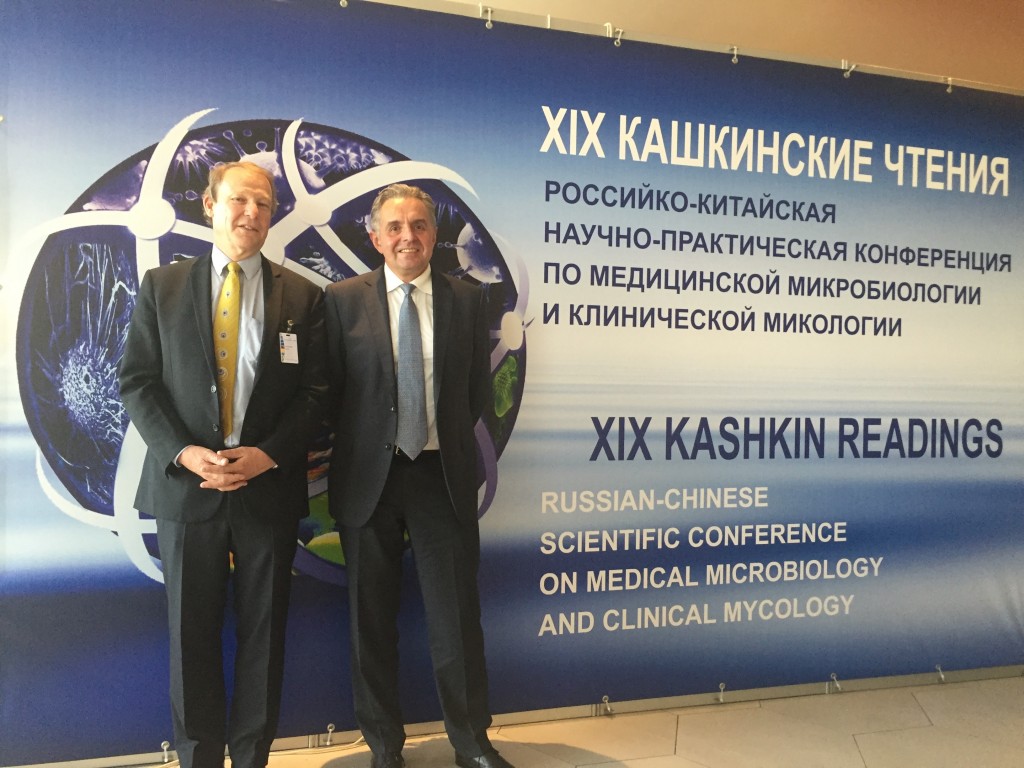 Prof Denning and Prof Klimko at the meeting in St Petersberg

He presented a mathematical model of the potential positive impact of providing rapid diagnostics for these diseases along with antifungal therapy. Assuming that 60% of the affected population would have access to both diagnosis and therapy for these conditions, deaths would fall from 1.26 million to 425,000 over 5 years to 2020. The model assumes that 90-90-90 (view here) as a major impact as well and reduces deaths by an additional 200,000 a year over the same time frame.
Provision of antiretroviral therapy alone is critical, but insufficient, because of non-compliance, drug stockouts and viral resistance.

Denning called on all 500 attendees to contribute to this program of work, given the potential impact. He pointed out that most deaths from AIDS are patients otherwise in the prime of life – typically aged 35 years.