In the first study of Candida bloodstream infection in 27 Intensive Care Units (ICU) in India, an incidence of 6.51 cases per 1,000 ICU admissions was seen, equating to ~90,000 cases nationally. Mortality varied from 35-75%; about 40,000 deaths. An estimated 14.3 million patients are admitted to ICUs in India each year.

The true burden of Candida bloodstream infection (candidaemia) is larger as only ~33% occur in ICU. Therefore the population incidence in all hospital admissions in India is estimated to be 270,284 per year – equivalent to a population incidence of 21.1 per 100,000 people.  This number is very high and approaching the incidence in the USA in 2012 (Cleveland et al).  A dramatic rise in candidemia in adults over the last two decades was found in Atlanta, Maryland, Baltimore & Georgia.

In India, the authors report 1,400 ICU acquired candidemia cases, of which 65% were adults. In other countries the incidence varied by ICU: from 0.24 to 34.3 patients/1,000 ICU admissions. The 30-day crude and attributable mortality rates of candidemia patients were 44.7 and 19.6 %, respectively. A significant difference in the rate of candidemia survival in public sector compared to private
hospitals was also seen  (Fig 1). 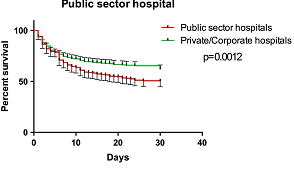 Professor Arunaloke Chakrabarti author of this study and Head of Medical Microbiology at the Postgraduate Institute of Medical Education and Research in Chandigarh (PGIMER) declared: “The high rates of candida bloodstream infections in India in our ICUs, amounts to an infectious disease emergency. Some hospitals have low rates, others very high rates, which could reflect the case mix of patients or the medical abuse of antibiotics and poor infection control. Awareness of fungal infections among clinicians and competence of the laboratory to diagnose candidemia may also play some part on this variation of incidence. Action is urgently required on a national level to speed up diagnosis and prevent infection, if the huge numbers of deaths are to be reduced.”

The study was published in “Intensive Care Medicine” this month and showed acquisition of candidemia occurred soon after admission – with a median occurrence at 8 days. Patients with a low APACHE II score were also susceptible to acquiring this infection, with a median of 17 days following admission, when compared to studies from other countries such as Spain, USA and Argentina. In addition the mean age of the patients with candidaemia in Indian ICUs was lower at 49.7 yrs than in other countries (mean 59 – 66yrs).

Blood culture is insensitive for invasive candidiasis, which is just as lethal as candidemia, with blood culture only detecting ~ 40 % of all cases. (1,2)  Adjusting for this factor, the total caseload of invasive candidiasis in India is likely to be as 675,710 per year with an estimated mortality of 50% leading to 337,855 deaths.

This is the largest study of acquired candidemia in India, the incidence of ICU candidemia is high compared to other countries, with an early onset of infection after admission and patients had a lower mean age and also acquired infection with a lower APACHE II score.