A new lateral flow device has been invented by Prof Chris Thornton of Exeter University, UK, to accurately diagnose invasive pulmonary aspergillosis. The affordable device uses a highly specific monoclonal antibody which detects a diagnostic marker of Aspergillus infection and uses a small blood sample. Aspergillosis is a notoriously difficult disease to diagnose -affecting many immunosuppressed individuals such as cancer patients, transplant or HIV patients. Invasive aspergillosis is a principle cause of death in acute leukaemia and bone marrow transplant patients. The new device costs just £10 is rapid and the compatibility of the device with hospital procedures, means that detection of aspergillosis can be accurately monitored at the point of care using either a blood sample or fluids collected during lung biopsy.There is also an ongoing trial with leukaemia patients at the Royal Devon and Exeter Hospital under the care of Consultant Haematologist Dr Paul Kerr. He said: “We at the Exeter Leukaemia Unit are very proud to work with Dr Thornton and his team on this project; diagnosing this life-threatening infection is very difficult, and can involve either subjecting the patient to unpleasant and potentially dangerous investigations, or can result in the use of expensive and toxic medication that may not always be needed. It is very exciting to think that a simple laboratory test may allow us to greatly simplify this process in the future.” T 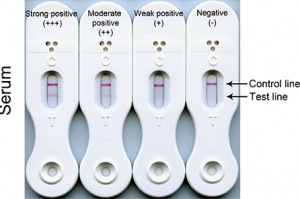 hornton et al (2008) generated an Aspergillus-specific MAb (MAb-JF5) using hybridoma technology and then used it to develop an immuno-chromatographic lateral-flow device (LFD) for the point-of-care (POC) diagnosis of IPA. A major advantage of the LFD is its ability to detect aspergillus activity, since MAb JF5 binds to an extracellular mannooprotein antigen that is secreted during active growth of the fungus only. The lateral flow device will be used in hospitals around the world from August. Press release,  Further information: Thornton et al 2012, Article